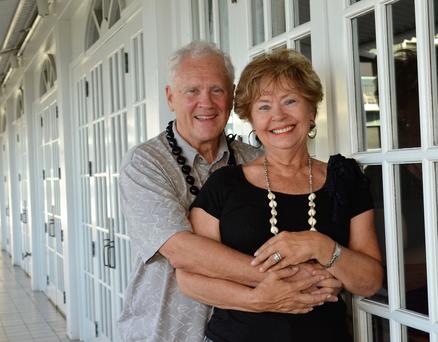 Mervyn Walker was born in New Zealand to missionaries, Dal and Dorothy Walker, who established a flourishing Bible School in Tawangmangu, Indonesia training over 4,000 young men and women to return to their own island and plant churches within their village.  Merv spent much of his childhood there, learning the Indonesian language.  At the age of 14 he traveled to the USA and also received the call of God to become a minister of the gospel.  He began speaking at youth meetings and revivals taking every opportunity available.  At 17 years of age he began Bible School training along with University while working part-time as youth pastor for Gospel Lighthouse Church in Dallas, Texas.  It was at GLC where he met his future wife, Darlene Hibbard, who was J.C. and Nell Hibbard’s daughter – founding pastors there.   Later he graduated cum laude from UTD with a degree in history.

After missionary and evangelistic ministry throughout the USA and Pacific Rim, Merv and Dar returned to Dallas to serve 4 years at their home church, GLC as associate pastors.  In 1970 God called them to plant a church in Garland, Texas (Garland Gospel Lighthouse Church later known as New Life Fellowship).  They served there 21½ years.

In 1991 they were invited to first serve for one year as associate pastors at Kauai Bible Church.  Then in 1992 they became lead pastors serving until September, 2017.   During that time they also birthed Church on the Beach going once a month (every third Sunday) to various beach parks on Kauai.  It’s an outreach to the island especially helping the needy and homeless people who might never come into a church building.  The gospel message along with the ministry of meeting practical needs in so many ways, including a hot meal is provided each month.   Other ministries were begun providing a Sunday service to residents at care homes and assisted living facilities on Kauai. Many people received Jesus because teams from KBC were willing to “take the gospel message” to them!

Foreign missions have always been an important part of Pastor Merv’s ministry.  Along with a team of pastors from Oahu and Russia, over 60 churches were planted on Sakhalin.  Kevin Conner joined the team one year presenting Key of Knowledge seminar to the local Russian pastors and leaders.  Teaching at various Bible Schools in Indonesia, Kauai and Dallas has also been a part of Merv and Dar’s ministry throughout the years.  They believe the key to successful missions work is training the local people because they already know the language as well as the culture.

Today the Walkers are experiencing an “active retirement” in Rockwall, Texas.  They attend Life Spring Church where their son, Rex and Amy Walker serve as lead pastors in Rockwall, Texas (current location is in Fate, Texas).  Pastor Merv has been in active ministry 61 years and Dar 54 years.

Darlene is also an ordained minister who speaks at various conferences and churches (USA, New Zealand, Holland, Sakhalin) along with Merv.  They have three children, eight grandchildren and three great grandchildren.